Owing to its large reservoir of limestone, Satna is popularly referred as cement city of India. And because of this very fact Satna city today is regarded as one of the fastest emerging cities of Madhya Pradesh . But as much as this city today is about promising future, it is also about glorious past too, which has become integral part of its identity. Below you’ll find much more information about Satna city, which will tell you about what else makes this city stand out and unique among all other cities of Madhya Pradesh.

Satna falls in Baghelkhand region, which has seen the rule of many great dynasties and empires during ancient and medieval centuries. The most prominent and dominant ones were Kalacuri dynasty and Baghel Empire. These two empires left deep mark on this region, which is why their mention is absolutely pertinent here. Kalacuri dynasty was one of the glorious ancient Indian empires, while Baghel Empire (also known as Rewa kingdom) was one of the great indigenous empires of Madhya Pradesh state. In fact historians believe that Baghelkhand region partly derives its name from erstwhile Baghel Empire, which dominated and ruled this region from 14th century to 18th century. After 18th century Satna and entire Baghelkhand region fell into the hands of mighty British Empire, who by turn of 19th century had brought entire Indian subcontinent under its control. Read More........

The fact that Satna city is commercial capital of Baghelkhand region is enough to indicate how much economic potential this city holds. In introductory paragraph we’d already mentioned about this city being today one of the fastest growing cities of Madhya Pradesh. At the heart of its robust and resilient economy is huge pile of minerals, which has certainly put Satna city on the economic map of India. Although these huge piles of minerals are found in other parts of Satna District, but Satna city being the district headquarter, its economy has benefitted the most by their presence.All said and done about the importance of mineral and mineral extraction industry, agricultural sector is still one of the dominant sectors in satna’s local economy. Although due to growing urbanization of Satna city agricultural has lost some sheen, but it continues to be a dominant sector in the interiors of Satna District. Read More........ 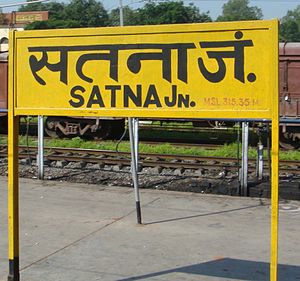 Beautiful religious places and places of great historical importance surrounds Satna city, which obviously have raised tourism profile of this city. Below are names of some of these tourist places and also brief description about them.

Chitrakoot Dham : Chitrakoot Dham actually refers to spiritual and devotional experience offered by various scared temples located at small town of Chitrakoot. Chitrakoot town is located just 60 kms away from headquarter city of Satna. Besides being home to so many temples, this small town also carries immense mythological importance. It is believed that Lord Rama, Sita and his brother Laxaman had spent their eleventh years in their fourteen years of exile in this very small town.

Famous Sharda Devi Temple in Maihar Town: Sharda Devi Temple, dedicated to Goddesses Saraswati, located in small village of Maihar is one of the most visited temples of Satna District. The main reason for this being its unique location. It is located on a hilltop and devotees have to climb 1001 steps to seek the blessing of Maa Sharda Devi. This is surely one of those rare temples that completely test the spiritual strength of devotes.

Shiv temple in Birsinghpur Village: This Lord Shiva Temple located in Birsinghpur Village happens to be one of the oldest temples of Satna District. Since time immemorial this temple has been evoking immense spiritual fervor among devotes of Satna region. Besides, this immensely famous temple is located just few kilometers away from Satna city. Approximately this temple is located some 1 kms away from Satna city.

Buddhist Culture in Bharhut town: This small town is one of the most celebrated Buddhists heritage centers of our country. Although it is not as famous as it ought to be. At the heart of its vast Buddhists heritage collection lie huge Bharhut Stupa, which is believed to have been constructed during Maurya king Ashoka. These stupas are unarguably one of the priceless archeological treasures of our country.


Satna at a glance