Mother Nature has certainly bestowed Satna city with bounty of natural resources, which has indeed played a critical role in making this city one of the important industrial hubs of Madhya Pradesh state. In fact if it hadn’t had huge reservoir of natural resources, it would not have been possible for Satna city to stamp its unique place on the map of Madhya Pradesh. So it is pertinent to ask what these natural resources are and what are other important geographical features of Satna city ? You’ll find answers to all these important questions in below paragraphs, wherein all the important aspects and geographical features of Satna city have been explored in brief yet exhaustive way. 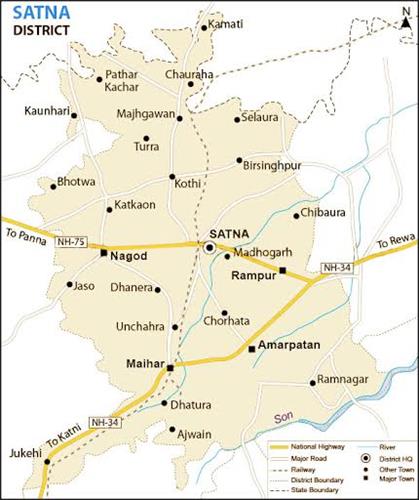 Satna city, as we all know, is District Headquarter of Satna District. Satna District is located between 80"21' and 81"23' east Longitude 23" 58' and 25"12' north Latitude. The total area of this district is 7,502 kms. Speaking about physical features, then Satna District falls in Vindhya Mountain Ranges, one of the most important mountain ranges of Central India. However, most of the hilly regions are found in Nagod Tehsil, which is some 30 kms away from Satna city. Speaking further about hills, then Kaimurs and Panna hills are two of the most principal hills of Satna region. Satna with undulating terrain is dotted with mountains, small hilly regions, rivers, and few tributaries. It is bounded by Banda District of Uttar Pradesh, Jabalpur and Umaria districts in south, Rewa and Sidhi districts in east and Panna district in the West.

In introductory paragraph we told you about important role natural resources have played in propelling this region into industrialized regions of Madhya Pradesh State. Well, that natural resources happens to be limestone, which is mainly used for cement production. The limestone reservoir is so huge in Satna that it contributes nearly 10% to India’s annual cement production. Therefore it is not at all surprising that today Satna city and its adjoining towns are home to some of the biggest cement factories and plants in India. Besides limestone, Satna region as a whole is home to many other major and miner minerals. These are namely Ocher, Bauxite, White clay, Laterite, Ordinary Sand, Murrum Floor Stone, and Ordinary Stone.

While Satna huge limestone reservoirs is well known to the entire world, but its huge forest areas are not. Well, at least they have not been as commercially exploited a minerals have been. Talking specifically about numbers and forest areas, then out of total 7424 Sq.Km of Satna District’s land area, forest area constitutes roughly 2037 Sq. Km. This is roughly 30% of the total land area, which is comparatively higher than other districts. Most of these forest areas are, however, located in the interiors of Satna District and not near Satna city. Huge forest wealth is already helping in production of woods, fire woods and even valuable Medicinal Plants, though their production as of today is at much smaller scale. But given the vast forest areas in Satna, production can easily increase into manifold and subsequently help in revenue generation for the district.

Tons, Son, and Paisuni are three important rivers of Satna District. Amongst these Tons River (also known as Tamsa River) is the biggest and is therefore the most prominent river. It rises from Kaumur hill in the Maihar Tehsil, which is located some 43 kms away from Satna city. Besides these three important rivers, other two small rivers that flow through this region are Simrawal and Satna Rivers. Here it is important to mention that Satna District and Satna city derives its name from Satna River itself, which actually originates from neighboring Panna District.

From above information we can certainly conclude that in natural resources Satna region is one of the richest regions in Madhya Pradesh state. We’re obviously indicting about its huge mineral and forest reserves, which have played a critical role in making Satna city so self sufficient and self reliant. Therefore it is not at all an exaggeration to say that its huge mineral reserves, especially its limestone reserves, is one of the salient features of Satna region.